Pristine and powerful recital of ‘Ravanolbhavam’ 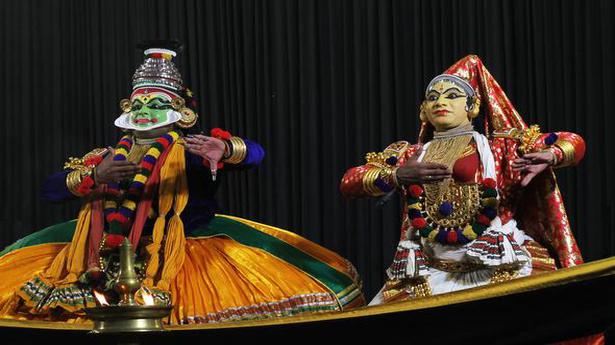 An evening of Kathakali and percussion showcased a complete Purappadu, a single Melappadam and a performance of Ravanolbhavam

The new theme in 2021 is going back to basics, said Kathakali artist Peesappilli Rajeevan. And this is what this age demands from artists — to build something exquisitely beautiful, pure, and unostentatious on a strong and simple foundation, said Rajeevan. The event that occasioned these remarks was Purappadu with “naalu nokku” and a “single” Melappadam that had gone out of vogue in recent times.

It was vintage Kathakali fare organised by an informal group of aficionados at Kunnamkulam, Thrissur, recently. The evening started with the full Purappad with its four segments. It was followed by another uncommon sight — the “single” Melappadam or the musical ensemble with only one set of percussionists. This was followed by the play Ravanolbhavam.

Purappad, the traditional opening pure dance piece, by Kottakkal Pradeep and Kottakkal Shijith, was pleasing to the eyes. Divided into four segments, and embellished by a variety of kalashams in different rhythmic patterns from the slow-paced to the brisk, it showcased the structurally disciplined and evolved footwork and body language of Kathakali. The percussion support by senior artists Kalamandalam Unnikrishnan on the chenda and Kottakkal Ravi on the maddalam helped the 40-minute Purappad scale aesthetic heights.

The Melappadam that followed, in a little over 50 minutes, can only be described as classic that would have brought back old memories to many viewers. Vocal music by Kottakkal Narayanan and Kalanilayam Rajeevan was pristine and full of gravitas, devoid of meandering essays. The different stages of the Melappadam, with rhythmic patterns played alternately by the two instruments, stood out for their clarity and purity of sound. Both Unnikrishnan and Ravi, who are brothers, matched each other beat for beat.

Ravanolbhavam, where the arrogant and boastful Ravana narrates the story of his success, is a power-packed and action-filled, two-hour saga. One big challenge for the artist here is pacing himself and conserving his energy level. Kottakkal Kesavan Kundalayar managed it brilliantly as was evident right through from his thiranokku or entry to the excellently executed Nalaratti kalasam at the end.

The way the 61-year-old Kundalayar built up the tempo slowly till the core of the tapassattam or penance — where Ravana chops of all his heads but one and offers them to the fire — was a connoisseur’s delight and a lesson for a budding artist. What lifts Ulbhavam out of the ordinary is the percussion team. Unnikrishnan and Ravi again did not disappoint. They were well supported by Kalamandalam Sudheesh on the chenda and Kalamandalam Aneesh on the maddalam. Kalanilayam Sanjay provided vocal support.

Kalamandalam Sreeram and Kottakkal Pradeep appeared in brief roles as Kumbhakarna and Vibheeshana respectively. Performed in front of a limited audience following COVID-19 protocol, the streaming video drew a large number of viewers. A positive fallout from the pandemic is that both Kathakali organisers and viewers have adapted to the latest technology and acoustics, though this has driven up the cost of programming.

The programme, the fourth by the informal group, was organised in collaboration with Kunnamkulam Kathakali Club. The group’s main aim was to try and fill the vacuum created by the pandemic, said its anchor Nandakumar Cheramangalath.