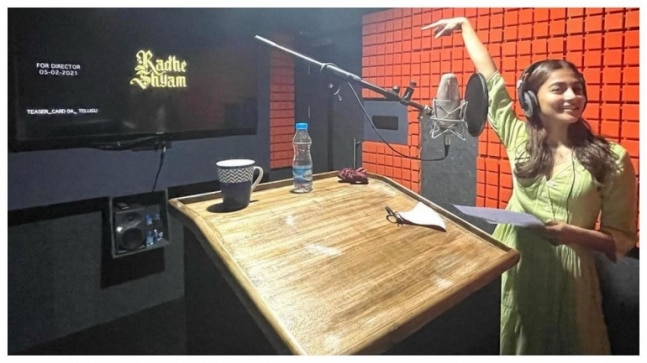 Pooja Hegde fans are elated as the actress has completed dubbing for Prabhas’s Radhe Shyam teaser. The film, directed by Radha Krishna Kumar, has been in the making for about two years now. The makers were supposed to wrap up the shoot in May 2020. However, due to the outbreak of the novel coronavirus, the production work had to be stopped. Now, the film is nearing completion and makers have decided to release the teaser on Valentine’s Day (February 14).

Pooja Hegde, on Tuesday (February 9) night, took to Twitter to share a picture of herself dubbing for the teaser of Radhe Shyam. She announced the teaser release date and wrote, “Early morning dub for our teaser..14th Feb, here we come #soundon #RadheShyam (sic).” Director Radha Krishna Kumar also shared the picture and wrote, “Prerana”, the name of her character in the film.

Hashtag #RadheShyamteaser has been trending on social media for a while now.

A few days ago, UV Creatiions, took to Twitter to reveal Radhe Shyam pre teaser. Their post read, “Get ready for the biggest love announcement of the decade! 14th Feb, save the date! #RadheShyamPreTeaser Starring #Prabhas & @hegdepooja Directed by @director_radhaa Presented by @UVKrishnamRaju garu (sic).”

In the pre teaser, Prabhas can be seen sporting a suit and walking down a lane during a snowfall.

Get ready for the biggest love announcement of the decade!
14th Feb, save the date! #RadheShyamPreTeaser https://t.co/ALrESp2z7v

In November 2020, the team shot with a minimal crew in Hyderabad adhering to government rules and regulations. They had already completed the film, with major portions of it shot in Europe. In March, the cast and crew of the film, including Prabhas and Pooja Hedge headed to Georgia to shoot important sequences. They completed the schedule within 18 days and got back home, a few days before the government imposed the lockdown.

Radhe Shyam is said to be an epic love story set against the backdrop of Europe. The film features Sachin Khedekar, Bhagyashree, Priyadarshi, Murali Sharma, Sasha Chettri, and Kunaal Roy Kapur in important roles and will be releasing in five languages.

Prabhas is currently shooting for a film titled Salaar directed by Prashanth Neel. Produced by Hombale Films, the film is tipped to be an action thriller with Prabhas playing a violent character. Apart from Prabhas and Shruti Haasan, Kannada actor Madhu Guruswamy has been roped in to play a crucial role in the film. The film will hit the theatres later this year or early 2022.

The Baahubali star also has director Nag Ashwin’s project, which will go on floors in the second half of 2021. He is also working on a 3D film titled Adipurush in which he will play the role of Lord Ram.