NYT Columnist: Sure, China’s Committing Genocide, But at Least They Don’t Have Conspiracy Theories 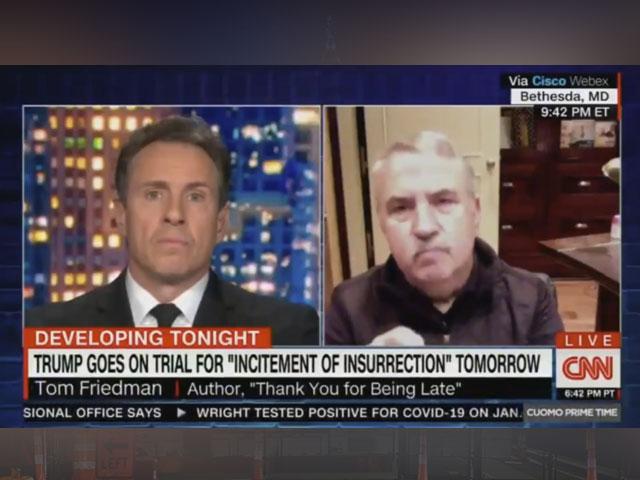 New York Times columnist Tom Friedman — the one who argued: “one-party autocracy” has “great advantages” when led by the “reasonably enlightened group of people” in China — told CNN’s Chris Cuomo that, while the communist country is guilty of genocide, they at least don’t have to deal with conservative lawmakers or fringe conspiracy theories.

Friedman made the bizarre comments during a segment on “Cuomo Prime Time,” in which he and Cuomo talked about the Senate impeachment trial against former President Donald Trump.

“What are they doing in China today?” Friedman asked. “You know, Chris, do you know that it takes four hours and 18 minutes to take the bullet train from Beijing to Shanghai, and it takes 21 hours to take the train from New York to Chicago — and they’re both about the same distance.”

New York Times columnist @tomfriedman compliments China on their fast trains in spite of the “bad stuff with the Uyghurs” and says that America is a “deeply unserious” country pic.twitter.com/UBeVibkpuK

The Times writer went on to push the unsubstantiated claim that Trump is solely and directly responsible for the Jan. 6 riot inside the U.S. Capitol and accused the U.S. of being a “deeply unserious” country.

He then praised President Joe Biden for being “a serious guy” who is “cursed by a Republican Party that is chasing a madman,” referring to Trump.

None of the remarks Friedman made should be surprising. After all, the Times just days ago published this story: “Power, Patriotism and 1.4 Billion People: How China Beat the Virus and Roared Back.”

One year into the virus from China ravaging America, the New York Times is publishing glowing propaganda about the Chinese Communist Party. https://t.co/6xqufzxAFP

All of this comes as China is systematically committing genocide against the persecuted Uyghur Muslims. Religious rights experts have said the communist nation is enslaving, killing, and abusing the Uyghurs, placing them in “re-education” camps around the country, CBN News reported.

China’s state-run media has even bragged about its forced sterilization of Muslim women.

On Jan. 19, the day before Trump left office, former Secretary of State Mike Pompeo concluded China is, in fact, guilty of genocide. He charged the CCP with “arbitrary imprisonment or other severe deprivation of physical liberty of more than one million civilians, forced sterilization, torture of a large number of those arbitrarily detained, forced labor, and the imposition of draconian restrictions on freedom of religion or belief, freedom of expression, and freedom of movement.”

“I can’t add nothin’,” Cuomo said at the end of the segment with Friedman.