‘I Would Never’, a movie about broken trust, took a lot of trust to make, says Kiran Deol 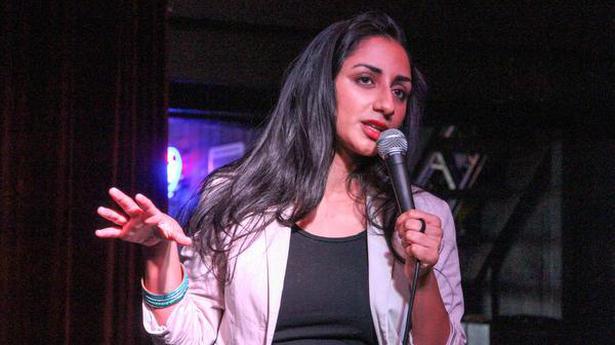 Over a phone call from Florida, Kiran Deol looks back on the fervent support that I Would Never has received in the last 24 hours as it currently is in the running for the 2021 Academy Awards’ ‘For Your Consideration for Best Live Action Short Film’. The Indian-American filmmaker calls her latest short “a massive swing” at a changing filmmaking culture where there are no guarantees of knowing where said film would land.

Many will recall Kiran from her guest roles on series including Modern Family, How To Get Away With Murder, The Mindy Project, and New Girl, as well as a main role in NBC’s Sunnyside. She has also appeared on Lilly Singh’s talk show A Little Late with Lilly Singh. She also is a co-host on podcast Hysteria. But she is about to be better known for her filmmaking chops.

With I Would Never, Kiran wanted a “modest” approach. After all, the film was made on a small budget and was even shot in a single room in just two days. It follows two best friends studying late at night; the session turns intimate, and boundaries are traversed in ways that change the relationship forever.

Key artwork of ‘I Would Never’

Kiran wrote and directed the short which also stars her long-time friend Dan J Johnson. Starring in the short herself, it harkens back to previous instances of Kiran stating south Asian women are meant to be docile and submissive; so, does her starring in I Would Never challenge this notion? She responds in two parts, “I knew I wanted to centre people-of-colour in the film, putting minority talent in this film. When I look at almost any film that touches on these subjects, it’s still mostly white women at the centre – which is valid and necessary – but this is affecting women of all ages and races. I wanted that to be part of the fabric of the film.”

She continues, “[Secondly,] I also spoke with a director friend of mine, Meera Menon, as I was nervous to do both. She said on the day, the biggest concern is making sure your actress is safe, comfortable and taken care of. I was also incredibly supported and everyone was in sync: Ante Cheng who is a beautiful shooter, our editors Zeus Quijano Jr and James Darling, my producer Erica Fishman made sure we set it in a location where we could rehearse – so much work was done pre-production so that on the day, I could just be the actor. I didn’t watch a ton of playback; I trusted their eyes. It was ironic because it’s a movie about broken trust, but it took so much trust to make. You’re trying to arm yourself with a series of gifts before you go in, because tone is a challenge.”

‘Comfort’ being a keyword in mind, films and series with sexual content now often hire intimacy coordinators to help achieve the correct tone and trust. Given Kiran spearheaded much of I Would Never, did she also end up being intimacy coordinator? “Our production was just so much smaller so there was an inherent intimacy built into this structure, such as the single-room setting, and that we were able to meet and plan a lot. Because it was me in that position, there was a lot of control.”

A few people have seen the film, including actor Rachel Bloom and screenwriter Aline Brosh McKenna, who have suggested Academy voters vouch for the short. But Kiran is just as keen on audiences and filmmakers alike resonating with it. “I was so shocked when people said they had experienced something like this or knew someone who had. How haven’t we seen this portrayed more on film in this way, if I’m hearing it so often?” Kiran, who reveres the 2020 Carey Mulligan-starrer vengeance-themed comedy-thriller Promising Young Woman, adds that more than cathartic or therapeutic, the feeling for her is “heavy,” particularly during the editing process after production.

Before I Would Never, she also has a feature film Tidal Disruption in the works. The psychological thriller was made before the #MeToo Movement, focussing on the sexual harassment climate within the astronomy industry. “I had written the film just before the Harvey Weinstein reckoning. I went to the American Astronomical Society in Dallas, Texas, and I remember by then, the articles were starting to trickle in. It struck me that it doesn’t take on the subjective first-person experience of what the woman is psychologically going through. So I wanted to do that.” That paved the way for I Would Never.

Ultimately, Kiran is thrilled that she has dipped into the world of shorts. “I learned a lot making this, about the level of care into pre-production. In America, there is this idea of creating a proof of concept. The stakes are lower with short films because it’s less money, and you can show people what’s in your brain, in a short film. There’s a stepping-stone mentality where they can trust you for a feature.”