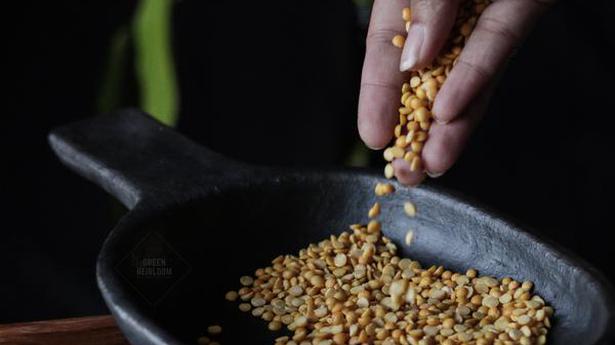 Many households are opting for brass and bell metal utensils, cast iron tawas, earthen pots and more amidst rising awareness of their health benefits

Kaviya Maria Cherian’s grandmother, Anna Thomas, a septuagenarian, cooks only in traditional cookware such as earthen pots, soapstone vessels, bell metal utensils, and cast iron tawas and skillets at her home in Thiruvalla, Kerala. “On a firewood stove, she makes the rice in a kalam while the fish is made in clay pots seasoned with age and use. Tempering is done in cast iron woks while tawas are for dosas. I really love the way she cooks and the flavour of the food,” says Kaviya.

However, to Kaviya’s dismay, there was not a single piece of traditional cookware at her house in Kochi. “When I tried to buy a cast iron kadai, I found it difficult to find one, as many of the craftsmen, especially in Kerala, had stopped practising their craft. In supermarkets and stores, I could only find aluminium vessels, non-stick pans and hard iodised pans,” says Kaviya.

She realised that there was a large market for such products though soapstone vessels, cast iron pans, skillets and bell metal urulis were not easily available in stores. Determined to make a difference, the 26-year-old, working in a bank in Mumbai, started Green Heirloom, an online store, in August 2020. It specialises in traditional cookware from all over India. She says even ubiquitous things like ceramic bharanis had to be sourced from Andhra Pradesh while the soapstone chattis come from Tamil Nadu.

The pandemic and a renewed interest in boosting immunity by adopting mindful eating and safe cooking methods has seen a surge in demand for traditional cookware. Many households are dumping their non-stick cookware for cast iron tawas, woks, earthen pots, kal chatti, brass and bell metal urulis.

“We are working round the clock to make vessels of bell metal, brass and copper. Urulis of varying circumference see demand from customers all across South India,” says Sajeesh V, working in a smithy at Mannar in Alappuzha district that makes uruli, vaarpu, chembu etc. The bigger urulis, once used for roasting rice flour, spices and for cooking payasams and curries are now favoured for cooking meat in homes and hotels as heat is evenly retained. For instance, homemaker Shailaja Sasikumar uses a brass uruli she inherited from her husband’s grandmother, to make chicken biriyani.

Sreedevi Padmajam at her outlet, Organo Gram, in Thiruvananthapuram

The spike in demand has seen Sreedevi Padmajam, who has an outlet in Thiruvananthapuram, run out of cast iron tawas. She says with a laugh that there is a waiting list. “I source it from two places, one in Tamil Nadu and one in Karnataka and even then I am unable to meet the demand. Meen chatti (earthen pots for cooking fish) is another fast moving piece. I source those mainly from Thrissur and a few from Thiruvananthapuram. There are red and black ones. The black clay pots treated again with heated rice husk for a glossy black coating,” she says.

Mumbai-settled Marina Balakrishnan uses only traditional cookware. Her Instagram page shows her making puttu on a gleaming bell metal puttu kudam, shining with the patina of age, and unniappams simmering in a brass mould. Marina asserts that cooking in those makes a difference to the taste and Suma Sivadas, a former chemistry teacher-turned-cookery host from Kottayam, agrees with Marina.

Suma’s YouTube channel has the 76-year-old explaining how to make ethnic dishes in traditional cookware. “As a chemistry teacher, I know that the souring agents we use in our cooking will not react with the soapstone vessels. Earthenware enhances the taste and consistency of curries cooked in those, especially fish,” she explains.

Though she has a couple of non-stick cookware in her kitchen, Suma points out that even if a scratch removes the Teflon covering, it could lead to poisonous chemicals leaching into the food cooked in the damaged vessels. “Now, soapstone vessels might take a little time to get heated but it retains the heat for a longer time and that makes dishes like sambar and aviyal cooked in it tastier,” she believes.

Suma enjoys showing her viewers how an older generation used cookware like kudam and idli chembu. “Growing up in Thodupuzha, I remember my grandmother using a cylindrical brass utensil that could be opened on both sides to grill nenthran banana. It would be kept in the firewood stove when rice or curries were being cooked. After a while, the banana would be grilled in its skin. All those utensils seem to have disappeared from most kitchens.” She adds that every nook and corner in India has a range of traditional cookware that was manufactured locally or in the neighbourhood.

Jet black Longpi or Nungbi pottery from Manipur’s Ukhrul district is sought after all over India. “I have a small outlet in my homestay in Imphal and the pottery is a hot seller. Customers from abroad too have expressed interest. But this pottery, handmade with clay and black rock is made only in a particular village and so I am unable to get them in sufficient numbers. The price range is between ₹250 and ₹5,500,” says Satyajit Elangbam.

In many instances, the cookware has been modified for smaller, modern families. Kaviya observes that since most of her customers are from cities such as Pune, Chennai, Hyderabad, Bengaluru and Mumbai, she standarised the size of the cast iron kadais to 10 inches and that of the kal chatti to hold one to two litres. Small Urulis around seven-and-a half- inches in circumference have many takers. A manual is also sent to customers to show them how to care for their cookware. The price of her products range from ₹450 for a clay curd setter to ₹6,000 plus for bronze urulis and vessels.