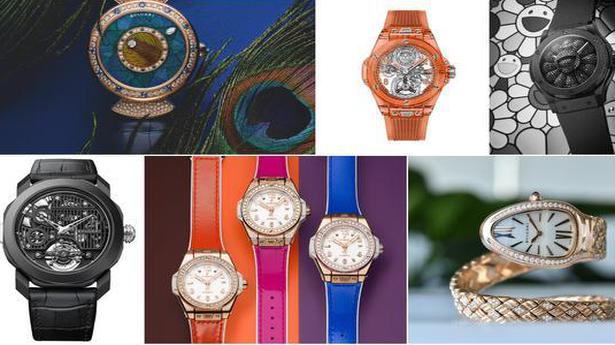 With zippy presentations and Zoom calls, Hublot, Bulgari and Zenith work as a team to impress watch aficionados

The mood is upbeat on Monday as LVMH Watch Week 2021 opens to press and retailers. In their dark suits and open collar shirts (except for Bulgari chief, Jean-Christophe Babin, who retained his tie), the French conglomerate’s watch bosses are all set for a repeat performance of last year’s Watch Week at Dubai’s Bulgari Resort. At the time, they had outsmarted the competition by showcasing their novelties in person, just before the Covid-19 pandemic kicked in. With the luxury giant’s watch brands working as a team, we wondered then if such events would soon replace the two major Swiss watch fairs. This time, of course, LVMH Watch Week is virtual, putting the CEOs’ presentation skills to the test.

Taking viewers into their manufacturing facilities, each highlights innovations. While Babin makes a reference to digital acceleration and the new silver dial steel model of the Octo Finissimo S, Hublot’s CEO Ricardo Guadalupe talks about micro rotors and their industrialisation of sapphire. Julien Tornare of Zenith, LVMH’s smallest watch brand, says he is banking on the Chronomaster Sport, a stainless steel chronograph that is immediately available in stores. Meanwhile, for attendees wondering why Tag Heuer isn’t in the lineup, Frédéric Arnault, who was named CEO in June last year, makes a brief appearance. A digital event is being planned for February 4, when they would announce a partnership, says the former Facebook employee who is also one of Bernard Arnault’s sons. Read on for The Hindu Weekend’s pick of limited editions at the Watch Week:

Bulgari is no stranger to chiming watches and the Octo Roma Carillon Tourbillon, with its three hammer chime and open-heart tourbillon regulator, is the star of their 2021 releases. In the days that follow, both Bulgari Watches’ Managing Director, Antoine Pin, and chief watch designer Fabrizio Buonamassa painstakingly take viewers through the mechanism, from the matte-finished titanium case (the metal chosen for the diffusion of sound), to the minute-repeater hammers fixed on the casebody, and the dial with riveting that allows sound to be broadcast. Driven by the new manual-winding Caliber BVL428, it is limited to 15 pieces worldwide, will be available later this year and is priced at approximately ₹1.85 crore.

The latest from the popular snake-inspired bracelet watch line is a more supple development of the Serpenti Scaglie. The first Serpenti Spiga watches made their debut in 2014, ‘spiga’ being the Italian word for wheat (the motif on the bracelet). Inspired by a heritage timepiece from 1957, with its matelassé pattern and modular technique, the two row bracelets feature 70 modular elements, wrapped in diamonds. They come in rose or white gold, with the model pictured here featuring 461 brilliant-cut diamonds and quartz movement. Available at Bulgari stores, ₹37.5 lakh onwards.

The ‘colour treasures’ theme that began with the Serpenti Rainbow collection now celebrates the saturated hues of the peacock. There are three versions in a 37 mm 18-karat rose gold case with the dials featuring hand-cut feather elements and signature Bulgari techniques, from marquetry to miniature painting and champlevé. On a Zoom call, Buonamassa refers to Roman inspiration and this includes the fan-shaped mosaics of the Caracalla thermal baths. Featured here, the Divas’ Dream Peacock Dischi with its natural feather marquetry dial, and in-house BVL 308 “dischi” automatic movement, has the hours and minutes indicated through a round and a pear brilliant-cut diamond respectively. From April at ₹53.2 lakh onwards.

In an unusually coloured sapphire case, what is also striking is the new self-winding tourbillon movement and the micro rotor visible on the dial side. Manufacturing sapphire can be challenging, even if, according to Hublot CEO Guadalupe, blue and red are the toughest yet. Limited to 50 pieces and at approx ₹1.26 crore.

“Sometimes collaborations with watch companies only involve printing on the packaging,” begins Takashi Murakami in the introductory video. The Japanese contemporary artist who has collaborated with Perrier, Louis Vuitton and others says he declined Hublot a few times before taking up the project. Now Hublot’s Classic Fusion has his smiling flower design, calling to mind the all-black aesthetic in last year’s Big Bang GMT collaboration with Japanese designer Yohji Yamamoto. The 45mm polished black ceramic case here features a 12-petalled flower and 456 black diamonds. With Hublot’s engineering wizards adding a ball-bearing system, the petals are mobile, and in keeping with Murakami’s whimsy, cheerily twinkle on his wrist. Approx ₹20.5 lakh.

At the presentation, Guadalupe calls it a ladies watch (in 33 mm with a one click system for strap changes), though I’d say it’s not just women who want straps to match their mood. Approx ₹17.3 lakh