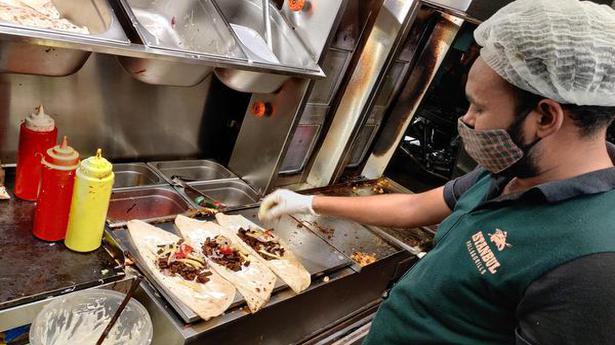 Alwin Mathews and friends are on the lookout for “something different” to munch on a Sunday evening in Thiruvananthapuram. They drive by the series of mobile joints flanking the busy Kowdiar-Kuravankonam road, and stop by one vending Turkish-style rolls for a quick bite. “They are quite filling and spicy. Sometimes, I have one for a meal if I plan to skip dinner,” says Alwin.

Thiruvananthapuram’s love for the West Asian snack shawarma now appears to have morphed into a trend of tangy Turkish rolls. Come evening, and Turkish roll joints that have mushroomed in the city become abuzz with the chatter of eager customers waiting to ‘grab’ and eat. It’s mostly a young crowd.

At Istanbul Grills and Rolls, Kuravankonam, seasoned meat (chicken and beef) stacked around a slow-turning vertical spit gets ready. A deft hand shaves off meat slices that are transferred onto a flat saj bread (rumali roti) before onion, lettuce, tomato and some French fries are added. These are topped with mayonnaise and chilli sauce. The flatbread is then folded into a roll, wrapped in butter paper and served hot.

Bazil Muhammad, proprietor, says he opened the joint after his travels in Istanbul two years ago. “There’s a street dedicated to meat rolls in Istanbul. I was blown away by the crowd there,” he says. He bought a truck and designed it to suit his requirements. The name, of course, is a tribute to the Turkish city.

Meat on spit at Turkish Ottoman Rolls and Grills

Competition is tight: close by stands Turkish Ottoman Rolls & Grills. Owner Muhammad Sharif says, “I was earlier running a travel agency that suffered greatly when the lockdown came. In order to retain my staff and help support them, I opened Ottoman.” To make his food as authentic as possible, he roped in cook Sulfikar Sulthan, who has experience preparing Turkish dishes while working with a restaurant in Oman.

What primarily differentiates shawarmas from Turkish rolls is the mix of herbs and spices used in the latter. Also, unlike the Arabian shawarma, its Turkish cousin mostly steers clear of cabbage and tomato sauce. But those running these joints want to keep the ingredients that go into the masala a “trade secret”. “Apart from the mix, we use Kashmiri chilli that is added both in crushed and powder form. Mayonnaise, barbecue sauce and a bit of our spicy in-house sauce are added during mixing,” says Amal Raj R of Turkish Ottoman Leba at Nalanchira.

At Turkish Rolls and Grills, Pazhakutty, en route to Nedumangad on the outskirts of the city, the rolls come in four types — normal, spicy, full meat and cheese. Nazim NS, who opened the joint with three friends, says apart from onion and tomato, cucumber is also added “to slightly neutralise the spice and the tang.” Their ‘full meat’ version, as the name implies, is an all-meat treat with no veggies, plus French fries.

The original Turkish rolls are admittedly less spicy, and restaurateurs here understandably make tweaks to suit the desi palate. Mohammad Fauzan of Turkey Gold, a newly-opened shawarma joint attached to the restaurant Moroccan Midway in Pettah, says a spicy in-house sauce, jalapenos, cheese, tabasco sauce and mustard sauce are used in their snacks. “I obtained the recipe for our Turkish rolls from a Syrian-origin Turkish chef that I got to know of via Facebook. After trials, we added some of our signature touch as well,” he says.

This variety is also reflected in the nomenclature of their rolls — they have Turkish-style Bob Marley shawarma (oregano and mustard sauce), Che Guevera shawarma (cheesy) and Ghostface (the spiciest) apart from Turkey Gold platter, which is a plate of meat slices that come with two pieces of bread, salad, dips and French fries.

A mobile barbecue on a Royal Enfield Classic with a large side-car introduced by three friends at Sasthamangalam had grabbed eyeballs as ‘Rider’s BBQ’ late last year. On its menu are Turkish-flavoured dishes such as Turkish chicken BBQ, Turkish tikka, wings and lollipops. “Our masala includes three varieties of chilli powder imported from Kuwait with the help of a friend working there,” says Harish K H. Another highlight is Turkish kofte (meat balls) BBQ. The trio are now set to launch an outlet near Medical College. Harish opines that perhaps one reason why Turkish cuisine is suddenly popular here, is because many in Thiruvananthapuram show interest in trying out new and different dishes.

Bab Arabia near Marappalam, which brands itself as a Turkish-Arabic restaurant, is perhaps the only place in the city that offers a wider choice of authentic Turkish cuisine. On the menu are Adana kebab (named after the city of Adana in Turkey), beyti kebab, pide, shish tawook (a type of kebab) and Turkish-style chicken kapama, a meat (beef, chicken or mutton) and rice-based dish.

Akbar Kunnappadi, in-charge of Bab Arabia, says, “Authentic Turkish dishes are deemed quite healthy. They need minimal oil but are also less spicy. So we spice up our dishes to suit Malayali tastebuds. For marination, Kashmiri red chilli powder is added. Apart from Turkish spices, we use leaves of rosemary, garlic, black pepper, thyme, olive oil, Himalayan salt (rock salt) and a wee bit of butter for flavour.”