The many flavours of broken wheat 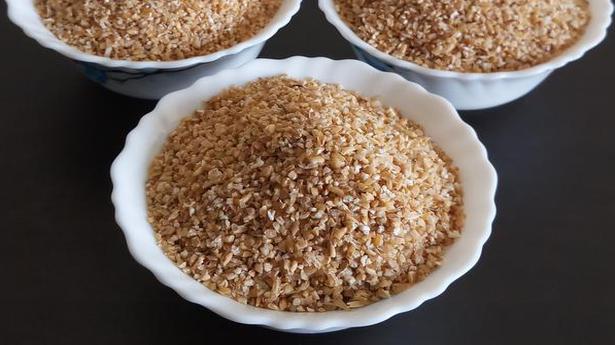 Through trial and error, Radhika Suresh found a simple recipe to make kozhukatta with broken wheat rava. Not an ingredient that is used frequently in most Malayali homes, varieties of broken wheat recently became a staple when the Kerala State Government began including them in free kits of grains, pulses, cooking oil and spices, distributed to ration card holders in the State.

“Searching for dishes to cook with broken wheat rava has become a necessity since we have been getting one kg packs from the ration shop with the kits from March 2020. Eventually, we became tired of the same old upma. That is when I hit upon the kozhukatta recipe,” says Radhika, project officer of Miyawaki afforestation programme run by Cultural Shoppe.

Soba Thomas, a schoolteacher, trawled the Internet and found a recipe to make appams with the wheat rava. Recipes of dosa, idli, puttu, upma, payasam, falooda, milkshakes and kanji, all made with varying grades of broken wheat, are also much in demand among homemakers in Kerala. Innovation is the name of the game.

“This broken wheat varies in size, from coarsely broken wheat to medium-sized rava and fine-sized broken wheat. That depends on the brand. At present, different kinds are also being sold in neighbourhood provision shops and super markets,” says chef Sandhya Kumar.

Satheesh Babu, manager, FMCG- in-charge, Supplyco, says the Government has been buying the wheat and giving it to mills registered with the Government. “So the quality was assured. I believe the Government began a trend of broken wheat being used frequently in many households. In the Athijeevana kits, initially given for three months from March, both broken wheat and atta were given along with 15 other items. In all, 85 lakh kits were given in about two-and-a-half months.”

He adds that though the initial plan was to give the kits for three months, distribution resumed during Onam and was continued till December 2020. From January 2021 onwards, nine items are being given in the kits but it does not include broken wheat.

Going by the surge in popularity of broken wheat, the Government is planning to enter the market with broken wheat under its brand name Sabari.

Over the last ten months, many cookery channels on YouTube, run by Malayalis, have featured wheat rava recipes . Even those running channels from the UK and the US have uploaded such videos. UK-based Neethu Johns, (YouTuber channel: Mums Daily) has uploaded recipes of interesting drinks using the rava, milk, and vegetables like beetroot and carrot. Some of these videos have raked up 1.3 million views. “During a phone call, my mother from Thrissur told me how her help was asking her for recipes to cook the rava. So my mother, a fine cook herself, experimented to make a milkshake and shared the recipe with me. I did my share of experimentation and added a dash of colour with beetroot and carrots,” says Neethu, a mother of four and a software engineer. Since the shake is for children, she wanted to avoid artificial colours.

Neethu also has recipes such as appam, custard, laddoo, ice-cream, halwa, kalathappam and more, all with broken wheat.

Ahead of the curve

But for Kerala-based KS Kumari, the trend is not new. She never misses a chance to cook broken wheat halwa at home. “I am diabetic, but there is no harm in having some sweet once in a while! The halwa is a big hit in my family. Now that there is always a stock of the wheat at home, I am tempted to make it often,” says the retired banker settled at Vaikom in Kottayam district. Upma and dosa are other items that she regularly prepares with the wheat. “Dosa is the easiest dish to make. Usually the wheat, which is soaked in water for three to four hours, is ground with black gram (urad dal) and left to ferment. But I don’t add the dal. Once the wheat is made into a fine batter, I add grated coconut, carrot and sautéed mustard, split black gram, curry leaf, garlic, ginger, onions and tomato to the batter. Crisp dosas can be made immediately,” she says.

Rajasree R, a homechef and entrepreneur from Thiruvananthapuram, makes a plethora of such dishes. “Besides dosa and appam,I have tried preparing unniyappam. Wheat, soaked in water for half an hour or so, is ground with mashed bananas and jaggery to prepare batter. Add fried coconut, cumin or sesame, if needed. I also make wheat balls, which you can also call the laddoo! To a mixture of jaggery syrup and grated coconut, add broken wheat that is fried. Make balls after adding a little rice flour to it,” she says.

Soak the broken wheat in boiling water for 15 to 20 minutes. Drain the water and keep the broken wheat in a sieve for about three minutes. Transfer it to a mixer, add quarter glass of water and grind to a fine paste. Then sieve the creamy ground mixture into a bowl. The residue in the sieve can be discarded. Keep this broken wheat milk aside. Heat 400 ml milk and stir in the sugar. As the milk begins to boil, lower the flame and add the wheat milk to it. Keep stirring gently and continuously to prevent lumps from forming. Soon the mixture starts thickening. Once the mixture coats the spoon evenly, switch off the flame. Let it cool completely. Now, put it in the mixer with the quarter cup of cold milk and one teaspoon condensed milk. Ice cubes can also be added now if you would like the milkshake to be really chilled. Also add the slices of cooked beetroot. Blend it well. Serve in tall glasses and garnish with chopped nuts. Pre-soaked basil seeds or chia seeds can also be added.

Shake made with broken wheat and beetroot by Neethu Johns

Soak the wheat in water for two or three hours. Grind it in a mixer by adding enough water. Strain it through a sieve two or three times by adding water to extract all the milk. Stir the wheat milk in a heated pan. As it becomes thick, add jaggery syrup and ghee. Add ghee at regular intervals so that the mixture does not stick to the pan. Sauté cashew nuts and whatever dry fruits you want to add in ghee and add to the halwa as it leaves the sides of the pan. Move it into a bowl smeared with oil/ghee and let it cool before cutting it into pieces.

One cup broken wheat soaked in water for 15 minutes

Salt as per taste

Squeeze off the water. Add the grated coconut and salt and grind in mixie for a minute. Remove into a bowl. Chopped ginger and green chilli can be added to the mixture. Make small balls and steam in an idli mould for 15 minutes in a pressure cooker without using the weight.