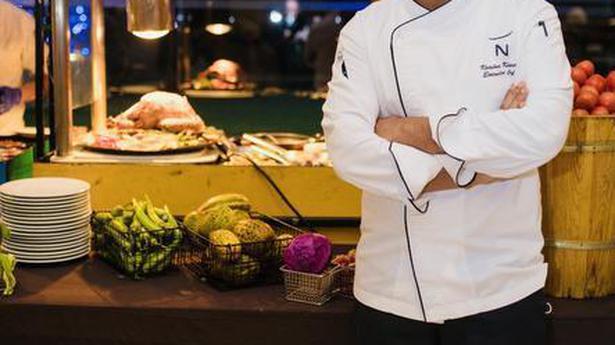 From unavailability of ingredients during lockdown to the big debate around immunity boosters, it’s been a tumultuous year for the chefs. Three chefs from the coastal city reveal how COVID-19 has changed their lives

The year 2020 will always be the time when the world stood still. Stores and shopping malls were closed, transport lines shut down, flights grounded and schools shut. But through this all, the hospitality industry held fast. The year began on a high note for them as people partied to ring in the start of a new decade. But in a matter of three months, the lockdown was imposed. This caused major changes in the food industry. Unavailability of ingredients, frequent sanitisation and the emphasis on takeaways, became a part of life.

“Something as basic as lemongrass was hard to find in the market,” exclaims Krishna Kishore, Executive chef at Hotel Novotel. “In my thirty years of experience as a chef, never had I seen a time where we ran out of our stocks and had to rely on what is available in the market,” he adds.

The hotel that houses five restaurants had to re-engineer the workings of the kitchens and come up with a common menu for all the restaurants. “This too was something that I have done for the first time in my career. Each of these restaurants specialises in a specific cuisine but we had to make away with that as we did not have enough ingredients or staff to present separate menus for each of them,” says the chef. The common menu was designed on the basis of what is available locally.

When Jayesh Karande, Executive chef at WelcomHotel Grandbay was faced with a similar problem, he gave up on exotic ingredients and looked into nearby markets for local produce. “Vegetables like gongura or thotakura that we rarely used have become a regular on our menus now. Gongura mamsam (gongura mutton) and pachadis (pickles) which are widely consumed in Andhra Pradesh and were appreciated only by local diners became popular even among the guests from other States,” he says.

However, the menus were redesigned not just on the basis of the ingredients available but also on the food trends of the year. “Immunity boosters were a big thing throughout the year. We noticed demand for food that had ginger, tumeric and pepper go up. So we had to redo a few dishes due to the trend. Earlier, to make a dish rich and creamier we would mellow the sharpness of ginger and pepper, but due to the new-found emphasis on immunity-boosting food, people don’t mind the intense flavours anymore,” says Jayesh.

At Daspalla, Chef Debraj Chatterjee drew up an immunity booster menu that had drinks and dishes like smoothie turmeric, anti-stress juice, red root pulao and multi-grained stuffed paratha. “We spent considerable time understanding the nutrient value of each of these dishes and how they would be beneficial for health.

Though turning the page on a calendar doesn’t change the world overnight, most of these chefs are looking at 2021 with hope. Most of them will carry forward valuable lessons that the past year taught them. Debraj has learnt the importance of being multi-skilled and he hopes he will continue to add more qualities to his skillset this year. “Just specialising in one cuisine is no longer enough. If a kitchen has to survive hard times with a limited staff, a chef who is a master at Chinese should also know how to make idlis,” he says.

Jayesh will continue experimenting with the local ingredients as they saved the day for him this year. “We don’t always have to rely on imported stuff to make a fancy feast. It could be done with the ingredients in your backyard. The habit of shopping locally saves us money and reduces the carbon footprint. So shopping local is here to stay,” he says.