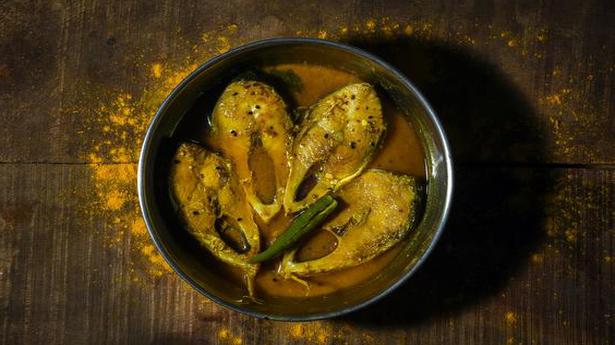 A mouth-watering collection of stories and essays, each chapter ending with a recipe

It is the season of black carrots — and a refreshing drink called kanji. Prepared with these antioxidant-rich carrots and spices, the velvety, reddish drink helps us battle the cold in North India. Chilled to the bone in a long cold spell, I had been thinking of kanji when a book arrived at my doorstep with an ode to the drink.

(Stay up to date on new book releases, reviews, and more with The Hindu On Books newsletter. Subscribe here.)

There was no kanji at home, so I had to make do with an appetising description of it in a story called A Brief History of the Carrot by Rosie Dastgir, included in the Claire Chambers-edited anthology, Desi Delicacies: Food Writing from Muslim South Asia. “He poured out two glasses that glowed in the afternoon light. Room temperature, as the aunt’s recipe specified. The taste of it was sour and pungent and strangely restorative, though not exactly as he remembered,” it goes. “Was some vital ingredient missing?”

Chambers writes that South Asian kitchens are the “engines of an entire culture”. The volume seeks to capture this essence through essays and short stories. “The picture that we get of Muslim South Asian food is extremely eclectic, taking in everything from taco parties to lotus root slow-cooked in yoghurt, and from khichri to barfi,” the York University professor says in a recent interview.

The collection is quite mouth-watering, especially since each chapter ends with a recipe. The works of fiction, however, left me a bit puzzled. These are nice food pieces, no doubt, but are they stories?

Take, for instance, Jackfruit with Tamarind by Mahruba T. Mowtushi and Mafruha Mohua. The short story is peppered with aunty this and uncle that — interesting characters, all, but each of them making only brief appearances. I would have liked to know more about them, especially about Manwara aunty, for I enjoyed the comparison between her fish curry and Amma’s.

“Amma is fussy when it comes to preparing a fish. It has to be cleaned numerous times… She then smears the pieces with turmeric and salt and lightly fries them — for a minute or two — in mustard oil. Amma has a fervid dislike of people who skip this process. Macher jhol should have a light, refreshing taste and so spices are added sparingly,” the authors write, adding, “Amma always complained of Manwara aunty’s macher jhol, which contained such inordinate quantities of vegetables and an odd assortment of greens that eating it was like walking through a virgin jungle with a machete in hand!”

It is always fun to read about food, but the problem is that this isn’t really a story. It works well as an essay, and is eminently readable, with little descriptions of dishes after every paragraph or two. But a story needs a beginning, middle and end, and this had none.

The Hairy Curry by Asiya Zahoor does have a twist in the end. The story is about young Gulla, a Kashmiri boy who has moved to Srinagar and is working in Bibiji’s kitchen. The description of a lotus-stem dish is invigorating. “The velvety white curry was first to touch his palate. The softness and tangy taste was a delight. Each of the spices had given their essence fully to the curry. Its starchy texture, carrying the spices that complemented each other, was delectable. The lotus stems were cooked properly yet retained a certain crunchiness.”

But Gulla is troubled: there’s hair in the curry — a lot of it!

I was drawn more to the non-fiction part, and particularly enjoyed Rana Safvi’s piece (‘Qissa Qorma aur Qalia’), in which she recounts food memories and practices of Lucknow.

I relished the conversation between two uncles-in-law where they complain (in chaste Urdu) about digestive problems, which persist although they have been following their doctors’ advice and eating “vegetarian khichri”. It transpires that the cook has been adding large amounts of dried fruit and meat to the dish.

The problem with a book like this is that it sends you straight to the kitchen. I certainly felt like cooking khichri after reading Farah Yameen’s well-written story about a child and her troubled phua.

“One does not serve khichri without mash and chutney to someone who is loved,” Yameen writes. Or without papad or pickle, in my neck of the woods. Shows that food, really, has no religion.

The reviewer is a food columnist.