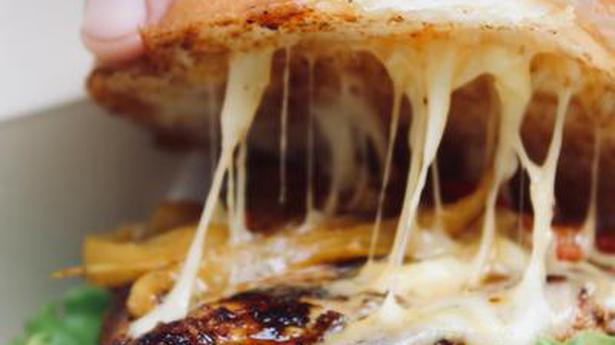 In Delhi, AKU’S: The Brrgrr Co. delivers burgers that come together well at different levels: the softness of the patty, the umami of the cheese, the sweetness of brown onions, and the juicy patty

Our young neighbours are great foodies, so we have detailed food conversations. I mentioned AKU’S: The Brrgrr Co. to them one evening, and they assured me that the burgers were “Yum”. I had first heard about this place when some friends marked an anniversary picnic with AKU’S. The praise that followed prompted me to take a look at this burger heaven. I found that it had an outlet in Gurugram and Delhi’s Defence Colony (call 8826669279).

I looked at the menu and saw that they had an interesting mix of burgers: freshly minced lamb patties, chicken breasts, or a prawn patty. We asked for three kinds: a Bold Bingo, Meister and Chalapeno.

I had the Bold Bingo, tasted the other two, and loved them all! Mine had a lamb patty, blue cheese, caramelised onions, blended cheese and lettuce. The buns were soft, lamb was juicy, the blue cheese gave it a just-right piquancy, and the lettuce lent crunch.

The patty wasn’t smothered with sauce (as some ‘MNC burgers’ are), so it didn’t drip messily, but gave the burger a kick. A young nephew who had a Bold Bingo the next day said that the meat, cheese and onions complemented one another well, and what really worked for him was the fact that the burger didn’t become a gooey mess in his hands, and the size was just right.

The Chalapeno had a stuffing of a grilled chicken breast, cheese blend, lettuce, jalapeño, peppers and jalapeño spread. This was ordered keeping in mind that one member of the household loves hot food — and she felt it was the best she’d ever had.

The master was the Meister — a lamb patty, with a fried egg, bacon, cheese, caramelised onions and sauce. The egg and the bacon (imported, says the menu) gave the burger a delicious twist. And the egg, of course, added another level of texture and taste.

If you’re hearty eater, this burger won’t be enough for a meal. You may need side dishes, or if you are a growing boy (like the aforementioned nephew), you may want to have a full meal after the burger.

There are quite a few sides, too. House made chicken nuggets with honey mustard mayo, skin-on French fries, onion rings and more. The fries are of three types: with salt and parsley, paprika, or truffle Parmesan and parsley.

Prices range from ₹250 to ₹285 for vegetarian, and between ₹250 and ₹450 for the non-vegetarian burgers.

Now I know why the young neighbours thought the burgers were yum. They indeed are. Yummilicious, I’d say.