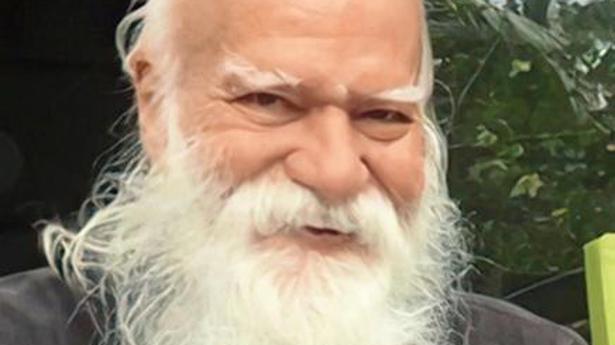 Satya Paul, best known as the designer who reinvented the saree for contemporary women, died at the Isha Yoga Centre here on Wednesday. He was 78.

His son Puneet Nanda shared on Facebook that Mr. Satya Paul, born on February 2, 1942, had suffered a stroke last month and was recovering at hospital.

“His only wish was to get all the things he was being monitored and poked with removed so he could fly away. We finally got clearance from doctors to take him back to Isha Yoga Centre, his home since 2015. As per his wish, he gently passed on with blessings of the Master,” Mr. Nanda wrote.

“I prefer wearing lighter saris and pairing them with cotton shirts, float sheer jackets and short tube tops of lighter fabrics. I like changing where the pleats are put. Something I discovered myself was to invert the sari and use the fall area up on the pallu.” – Manasi Scott is wearing Satya Paul’s Bindu Sari. This black and white screen print piece is highlighted by a red bindu. To give her a rock chic look, Anaita Shroff Adajania paired the sari with a sleeveless printed T-shirt and further layered it with a green shirt

According to a press release, Mr. Satya Paul’s inquisitive nature led him to be a pioneer in the field of retailing, starting in the late 1960s and expanding to exports of the finest Indian handloom products to high-end retail stores in Europe and the U.S. In 1980, he launched the first saree boutique in India, L’Affaire, and in 1986, India’s first designer label, with his son Puneet. The Satya Paul brand became one of the premier brands in the country and he passed on his mantle to his son in 2000. They exited the company in 2010.

Mr. Nanda wrote on Facebook, “Most people are not aware, more than as a designer or entrepreneur, he has been steadfastly a seeker … He couldn’t have had a sweeter life or passage … at the feet of the Master. We are sad only a bit, mostly rejoicing him, his life and now his passing with such a blessing.”

Sadhguru Jaggi Vasudev, Founder of Isha Foundation, tweeted, Satya Paul, “a shining example of what it means to live with immeasurable passion and unrelenting involvement. The distinct vision you brought to the Indian fashion industry is a beautiful tribute to this. A privilege to have had you amongst us. Condolences & Blessings.”