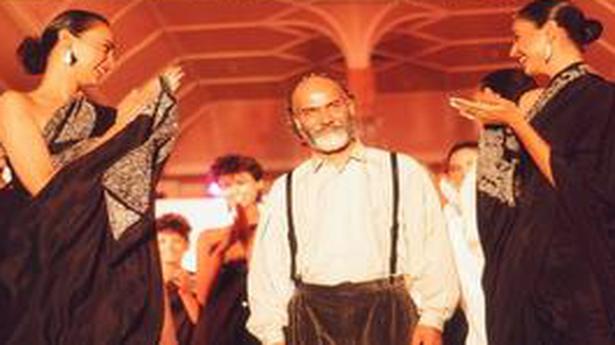 Be it with the contemporary drape or neckties, this legendary designer created a brand that wasn’t afraid to experiment

“He lived his life with totality, not leaving anything unfinished,” begins Puneet Nanda about his father, Satya Paul, who passed away on Wednesday at the Isha Yoga Centre in Coimbatore. He was 79. Nanda had posted a few details on Facebook about Paul’s “inner journey” to spirituality and his last five years at Jaggi Vasudev or Sadhguru’s ashram. As the tributes poured in, designers, Paul’s former clients, and the media referenced his legacy and contribution to Indian fashion.

Paul, originally born in Layyah, Pakistan, established his eponymous brand in 1985 with his then 17-year-old son. This was five years after he had launched L’Affaire in Delhi, reportedly the country’s first sari boutique. Their mission with Satya Paul was to be an Indian fashion brand that had mass appeal. “The choice of working with a sari was deliberate, as at that point 90% of women wore a sari and we wanted this to be a brand that was relevant to every Indian woman,” recalls Nanda, 52. Paul soon came to be known for his prints and vivid colours, and by the end of the 1980s, the label produced more than 50,000 units. At the time, many designers were struggling to produce even 100 pieces a year.

Their print-forward designs were often inspired by wildlife, art and music. When they were bought over by Genesis Colors in 2001, Nanda had taken over as creative director of the brand. In the early 2000s, no other homegrown brand had a retail footprint even close to Satya Paul’s, with 30 exclusive stores across India. This brand stood for freewheeling experimentation, which included a limited edition of silk scarves that featured SH Raza’s paintings. A tie made of silk and white gold, studded with 261 diamonds, made headlines when actor Salman Khan wore it at a charity event.

“The brand played a large role in supporting the weaving crafts,” Nanda adds, referring to the saris that were categorised under four collections every season. He says that they had a clear vision with the creative process. “This was at a time when there was no designer brand, no fashion awareness,” he continues, explaining how the Museum collection came from master weavers and that “it often took years to convince them to work on special designs”. Renaissance was a print collection with global influences, while Signature had exuberant florals and optical illusions that were described as “pieces of kinetic art” back then by The New York Times. Popularly known as cocktail saris today, they are synonymous with the brand.

Meanwhile, with the Avant Garde collection, “everything that was the norm in a sari was questioned”, according to Nanda. “We stitched it like a dress, or down the middle as a trouser, or a Grecian drape. We made it out of various materials, with metallic fibre weaving, or printed graffiti or cartoons, and used it as a billboard for social messaging.” These drapes were a precursor of today’s concept saris. “The brand that [Satya Paul] set up had so much foresight. He was the first person to take the sari, a staple in every woman’s wardrobe, and turn it into a ready-to-wear piece,” says leading fashion stylist Anaita Shroff Adajania (who was behind a successful Satya Paul campaign with celebrities a couple of years ago). “I met him a few times at fashion shows. He was very elusive, but always very warm,” she adds.

Since Nanda left the label a decade ago, several other designers took over the creative helm, including Masaba Gupta. “As a fashion student, I remember not being taught at all about Indian fashion,” says Gupta. “His passing has reminded us that young Indian designers must know about the resources that came before them. Satya Paul is and was one of India’s few brands that was both creative and had a retail footprint, and this is an important story for Indian fashion.”

Today, Satya Paul is owned by Reliance Brands, India’s largest player in the luxury market, operating close to 50 brand partnerships (including Tiffany & Co, Giorgio Armani and Bottega Veneta). Last June, renowned fashion designer and India’s master of minimalism, Rajesh Pratap Singh, was named Satya Paul’s creative director. “Satya Paul took textiles and turned them into something very modern and relevant. I hope to take that emotion and spirit forward,” he tells me. Having first interacted with Paul when he had his final submission as a student at NIFT, Singh has, in the past, referred to Paul’s impeccable dressing, his interest in textile innovation, and his attention to detail at his many showrooms. The recent Satya Paul collection under Singh, Valley of Flowers, clearly references the bold colour and design language of the label’s founder. Nanda has big hopes for Singh, who is leading the brand that bears his father’s name. Paul was a seeker all his life, Nanda had observed in his recent Facebook post. But in many ways he was also the man who set India’s contemporary fashion grammar.