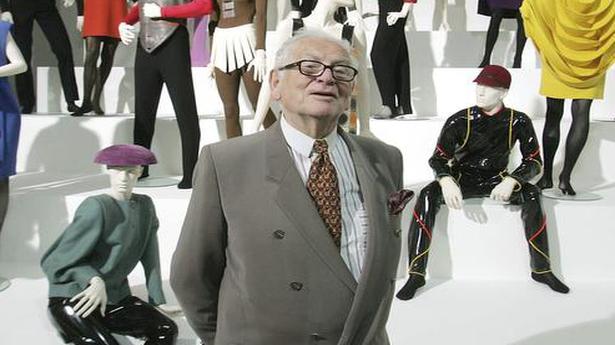 The Italian-born Frenchman was the first international designer to hold a fashion show in India. He showed us prêt, but are we taking it forward the way we should be?

The Indian fashion industry is built around the wedding trousseau, which is why it put itself into trouble, into a ‘no activity zone’, during the pandemic. Because it catered for the few, of the few, by the few.

What our designers need to embrace is the everyday prêt-à-porter that Italian-born French designer Pierre Cardin pioneered. In the ’60s, he coined the term India Modern and showed us how bespoke Indian fabrics could be used to create prêt.

When Cardin visited the country in 1967, at the invitation of Pupul Jayakar of Handloom and Handicrafts Export Corporation of India — because she wanted to expose the international fashion world to the variety of handloom in our country — he couldn’t believe the treasure trove of textiles we had. To him, this was haute couture. You could get six metres of intricately-ornamented material to make a design and get much more of it if required (you didn’t have to order hundreds of metres from machine manufacturers in Como for a homogenised design).

This was a time when Indian fashion was a collection of garage boutiques and trunk shows. I have black-and-white photos of a cousin of mine, Raj Suneja, turning embassy dining rooms into spaces for selling salwar kameezes and ‘maxis’ to a cosmopolitan crowd! Into this scenario, Cardin brought back the swathes of textiles he had taken with him — which he had designed and tailored as globally-relevant clothing — and showcased them at his seminal show at the Ashoka Hotel in Delhi. He highlighted the real strength of our textiles in a way that nobody till then had understood.

Needless to say, the audiences, which included then Prime Minister Indira Gandhi, were spellbound. It not only brought us traction in the short term (one remembers we shipped a lot of textiles subsequent to that), but also inspired many designers like Ritu Kumar and the late Rohit Khosla, as well as India’s first models, Anjali Phyllis Mendes and Kirat Rabier.

Thinking out of the box

I met Cardin in India while volunteering to model for his show. But I’d actually wanted to show him my fashion sketches. Two years later, when I went to Paris on a scholarship from the French government to study graphics at Stanley William Hayter’s Atelier 17, Pupul Jayakar arranged another meeting for me with Cardin, and that’s when he took me into his fold. I was lucky to be at the right place at the right time.

I remember my first time in his studio, waiting in his antechamber with actress Jeanne Moreau, while he finished his work. We then went to Maxim’s restaurant (which he later bought), where we talked about how food, cinema, and fashion aesthetics were linked. He was always talking about transdisciplinary connections.

From 1969 to 1971, I set up Cardin’s Laboratoire des Idées (or the Laboratory of Ideas) that explored transdisciplinary experiences and markets. So, one day I would be asked to do the car interiors for Renault, on another, I would be flown to Seattle to look at fitting out a Boeing jet. Or I would go to Milan to look at furniture, or to Belgium to do chocolate boxes. For a 19-year-old, this was heady. It was in my studio, which was just above Cardin’s office on the sixth floor of 59, Rue du Faubourg Saint-Honore, that I created the Boudin, a six-metre chair that could be tied into knots. It was part of India Modern, the exhibition that he sent me back to India later to do.

Yes, Cardin was criticised black and blue for his decisions — for looking at prêt, for his licensing. But he thought big and gave to ideas that caught his fancy. Like when he bought the Théâtre des Ambassadeurs near the Champs-Élysées, on Avenue Gabriel. He created Espace Cardin there, and we designed a restaurant, theatre and exhibition space that really didn’t make money but got him a lot of publicity.

Cardin believed that India, with all its skills, could be the leader of the world. But we aren’t there yet. How can we leverage our textiles? We have to stay a step ahead of what the machines can make, by thinking in terms of original content. Our designers who are working with artisan clusters today don’t encompass even 5% of the subsets of talent in India. Though I am happy they are doing this, I wonder if, while we have won a few battles, are we losing the war?

If you really want to make handloom work in scale, so that they can merit the idea of prêt, designers have to understand the innate structure of weaves, and even create the fabrics. Cardin was an expert in this. He could make the cloth yield to a silhouette. He created fabulous forms by understanding its architecture. After his show in 1967, Cardin asked us to look at blending wool and tussar to create a thicker fabric, and to work with asymmetry in design. There are so many permutations and combinations that designers can explore, that could support the imagination of even the wildest.

I have seen the knowledge, the desire — designers like Rajesh Pratap Singh and Shani Himanshu (of 11.11/eleven eleven) understand structure better than most — but I have not yet seen action. That will happen only when there is solid money behind a brand. This is where I squarely accuse corporate India. They have not understood the real wealth of the fashion industry. Designers also have to understand that they need partners with business savvy. Manish Arora, on his own steam, set up a place in Paris, but today he has no investors to take it forward. Design schools don’t teach business sense to survive.

Cardin had an uncanny sense of picking what worked. When he saw something, I don’t think the form excited him as much as its potential for money. He was clued into current affairs and was immediate in seeing the market. For example, he understood China much before anybody else did (he was the first western designer to hold a fashion show in the mainland, in 1979, shortly after the country started its Open Door Policy).

For us to achieve this, pedagogy is important. Our pedagogy lacks structural design. Unless we address that, we won’t have designers who are able to work with the materials we have. What we should take away from Cardin are the five Cs: common sense (to turn something on its head and grab eyeballs), compassion (an emphasis on teamwork and sharing, right down the pyramid), couture (an understanding of cut, structure and silhouette), critique (or pedagogy), and commerce.

Rajeev Sethi is one of India’s foremost design gurus, an art curator, and the founder of Asian Heritage Foundation.

As told to Surya Praphulla Kumar